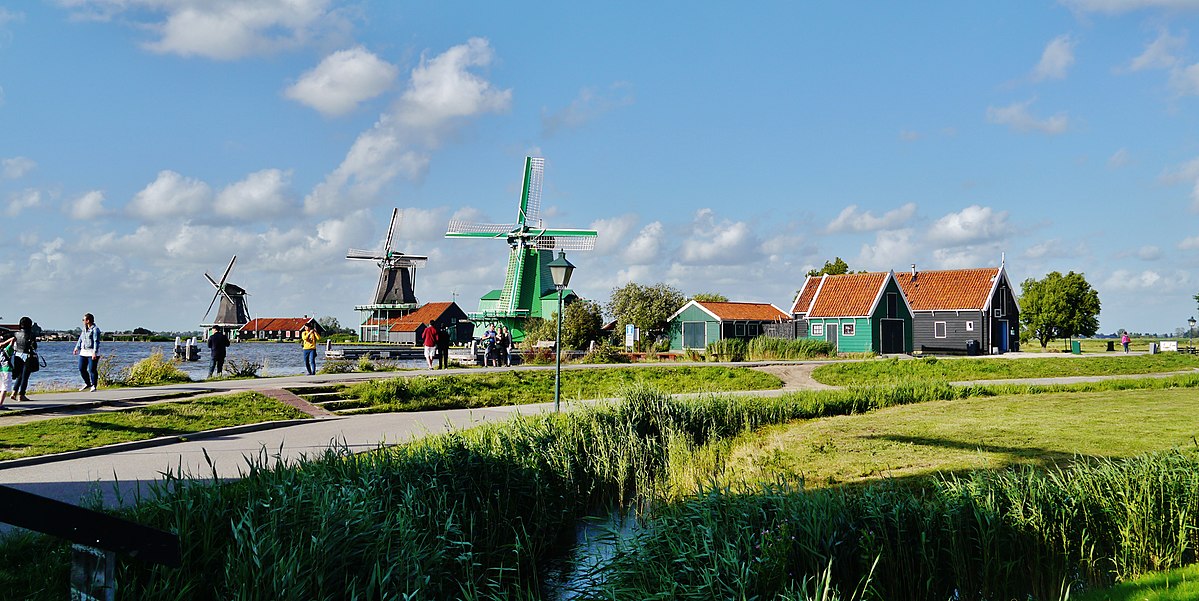 It may look like a collection of cute old green houses and windmills for tourists now, but Holland’s Zaanstreekused to be the center of an industrial revolution. Those wooden windmills could produce virtually anything, from lumber, to paper, ground spices, oil for food and paint, colorings, all kinds of fabrics, flour, and even cocoa powder.

Not bad development for an area that used to be an almost inhabitable swamp around the city of Amsterdam. In ancient times, people tried to settle in the region for centuries, but always ended up fleeing for the rising waters. This didn’t improve until the climate changed around the 8th century, and the land finally dried up a bit. The people who moved in, now calledZaankanters, dug ditches, causing the upper layers of the soil to dry out enough to be able to use it for agriculture.

But people and land continued to need protection from the water, and the Zaankanters built dikes and dams, and windmills on the shores. Then Cornelis Corneliszoon, from the village of Uitgeest invented the crankshaft in 1594. The crankshaft made it possible to convert the horizontal wind direction on the windmill sails into a vertical sawing movement. Suddenly, the windmills were able to saw more wood than had ever been possible by hand.

In the Zaanstreek they could do what the traders in Amsterdam couldn’t: saw wood, make mustard and oil out of grains, beat pulp into paper - all with help from this one invention. Thus, by the 18th century, an industrial revolution was born. The Zaanstreek became Western Europe’s oldest industrial areaand the region was home to 600 windmills, all wooden factories powered by wind. As ships were needed to transport all the raw materials and end products, the region also developed into the center of shipbuilding in 17th-century Europe. As many as 26 shipyards launched between 100 and 150 ships every year.

This industrial placesoon started to attract visitors –Russian Tsar Peter the Great came to Zaandam in 1697 – when it was the world’s shipbuilding center – to unravel the secrets of Dutch shipbuilding.French impressionist painter Claude Monet came to paint. His25 pictures of the rustic region of wood and water helped to spread the fame. 'Zaandam has enough to paint for a lifetime', Monet once wrote to a colleague.

Things declined in the 19th century, mainly because of wars and economic crisis,but the Zaankanters see a silver lining in the end of their era. The end of wealth meant that there was no more money to build new, big houses, and this is why many of the old ones weren’t knocked down. This enabled the Zaanse Schans to move well-preserved historic windmills and houses from all over the region to the museum area, starting in 1961. It's one of the few places in the world where you can still find functioning traditional windmills. Not only the buildings were preserved, there are people living and working in them, working in the same trades as the craftsmen back in the 17th century, making clogs, cheese or grinding oil. Over 1.6 million visitors came to see this living piece of Dutch history last year, to get a picture of what it must have been like in the olden days.

The Zaanse Schans in Winter